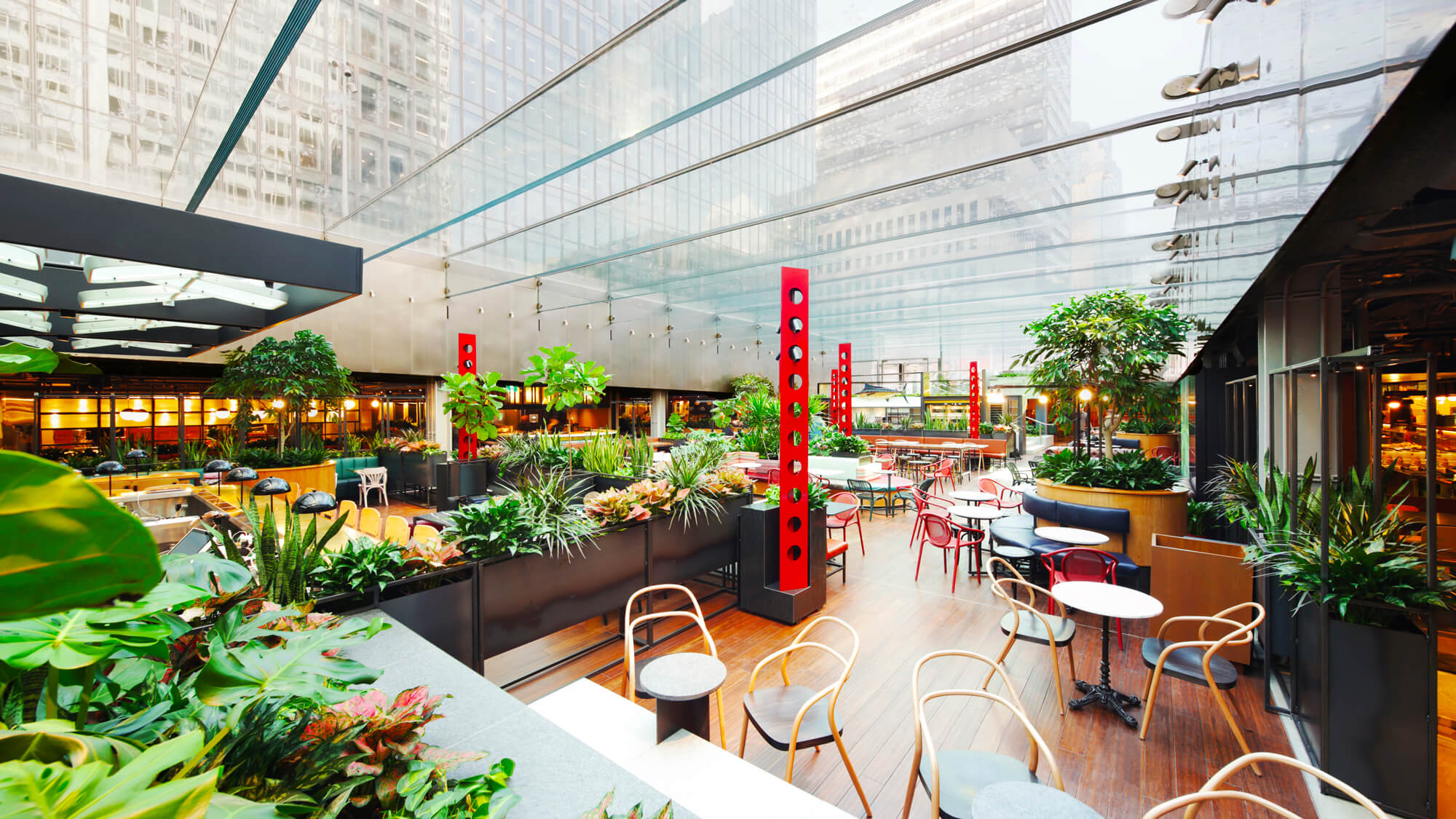 The revitalization of the PVM Esplanade is also part of Projet Nouveau Centre, Ivanhoé Cambridge’s $1 billion investment in its downtown Montreal properties. The  Company aims to position Place Ville Marie as a major urban gathering point, rivalling those of other great metropolises.

“Renovations performed in the 1980s had become quite dated, and the owners wanted to bring in a new approach,” explains Jean Pelland, Architect and Senior Partner at Sid Lee Architecture. “After studying it from an historical point of view, we actually rolled back some of the modernist elements of the plan in order to strike a functional balance between architecture and usability.”

In the biergarten spirit, Le Cathcart provides a new 35,000 square foot space that opens to the city, offering a year-round festive, luminous, and welcoming environment. A lively urban square at the heart of the city’s busiest routes and summer terraces, Le Cathcart Restaurants et Biergarten echoes the vitality of Montreal streets.

“Realizing a project in downtown Montreal for an iconic site like Place Ville Marie comes with immense responsibility: to create a living environment that thousands of people will visit daily,” explains Yves Dagenais, Architect and Senior Partner at Menkès Shooner Dagenais LeTourneux Architectes. “By establishing a direct connection with urban activity, the implemented architectural response makes it possible to meet that challenge.”

An indoor extension of the city
The project focussed on connecting the traffic of the vibrant city streets and Esplanade PVM to the indoor courtyard of Le Cathcart, enticing the public to enter the latter’s inviting environment. After reimagining the Esplanade, entrances, and connecting corridors, the same urban planning strategy was applied to Le Cathcart’s interior design. The result is an approach from the exterior that lures visitors to the discovery of two sunken courtyards, an indoor garden, and an expansive open space beneath a glass pavilion. Supported by 18 glass beams, a 16-foot, high-quality glass slat ceiling provides remarkable transparency, offering a seamless connection to the surrounding cityscape, as well as an unobstructed view of Mount Royal to the north. One of the largest glass structures of its kind in North America, the PVM glass pavilion also infuses abundant natural light into Le Cathcart, both by day and by night.

The Esplanade PVM’s four existing skylights gave way to this floating structure that connects the city to its underground counterpart. It serves as a new and enticing gateway from the city streets to the gourmet fair and elegant boutiques of Galerie PVM.

The food courts
Le Cathcart’s interior is divided into three distinct environments, comprised of a food alley, an elevated wooden deck and garden, and a series of cafés. The entirety of the space offers seating for more than 1,000 people, with 15 kiosks of resto-bars, bistros, and cafés, including three restaurants with table service. The design elements are positioned to create subdivisions and variations in tonality, lighting, and ambiance, while thematic elements such as planters and banquettes provide a sense of continuity extending to the external Esplanade and throughout Le Cathcart’s spaces.

“We used a refined industrial approach, beginning with lots of steel and other rough materials, and then softened them with more sophisticated finishing layers,” says Jean Pelland. “We really played into those two environments in order to balance the elevated quality and feel of the space with the aesthetic appeal of early century industrial architecture.”

With its streetscape feel and influences, Le Cathcart’s food alley captures elements of both urban design and industrial architecture. Within that ambiance, each individual space features unique design elements, from the Americana-style diner with its chrome and stainless-steel surfaces, to the Asian offering featuring custom-made Japanese chairs, upholstered with green leatherette as a continuance of thematic comfort. A common area features large, atelier-style tables and chairs, with refined finishes that reinforce the marriage of design and comfort.

At the heart of Le Cathcart, a wooden deck and garden is flanked to the north and south by two pavilion-style bars. The deck’s bamboo flooring and natural plants and trees further establish a connection with the exterior, while strategically placed planters extend the flow of greenery throughout the surrounding sunken courtyard. Abundant wood varieties create different moods and colours extending to Le Cathcart’s series of distinct cafés, each physically, psychologically, and thematically subdivided into their own seating areas and inner terraces.

To replicate elements of the external environment, street material and refined versions of outdoor seating were included, creating a welcoming oasis where people can take a moment away from the hustle and bustle to indulge in a variety of particular environments, yet remain connected to the vibrancy of the beautiful city above.

Inspired — Martin Leblanc
We want to offer content that truly matters to you. By browsing this site, you accept the general terms of use and the use of Cookies. Learn more